Grace and peace to you,

With the announcement that the Province on Ontario is moving into a shutdown as of we will have to reinstitute the Diocese of Huron’s “Loving Our Neighbour” Red Stage guidelines. There have been some modifications to our Red Stage guidelines since the summer so please see diohuron.org for the details.

This shutdown was not totally unexpected, but it is very disappointing. It is going to be hard on some people and we will be doing our best to offer comfort and to alleviate any suffering that this shutdown may cause. It is also disappointing to be unable to worship in-person at this most holy time. There will be many alternatives offered by our churches, in print materials, and online. I pray that your faith will be strong and that you will be comforted by our belief that Christ comes to each of us just as he came first to Mary and Joseph in their dark and difficult world.

Speaking of Mary, my Christmas message for you is simply this: follow Mary’s lead; be like Mary. Some of you will know that this year I’ve been noticing things about Mary, the mother of Jesus, as a person of faith, a person of God, and as a disciple. Things that we notice about Mary, eventually tell us something about Jesus, who tells us everything about God, but first we may focus on Mary, his mother.

When we first meet Mary, according to Luke’s gospel, we are plunged into the scene where the Archangel Gabriel visits her, her and not anyone else, and she is as shocked as anyone else would be. First, just that an angel was there. That is always a shock. Just going along in a normal day, then THERE. We aren’t given any details about where or how this encounter happened . . . but I wonder. I heard young woman preacher (Allie McDougall) wonder about this out loud recently, “Was she asleep and startled awake by a bright angelic presence in her bedroom? Was she contemplating her impending marriage to Joseph on the way to draw water when a stranger began walking alongside her? Or maybe she hanging up some laundry, only to see a form appear between the flapping sheets?”

No matter how, having an angel come into your presence, into your home, into your life, is awesome. But then to have that angel tell you that you are favoured, and that you are with child, and that the child will be holy, and that . . . well . . . you have to be shaking your head at the impossibility of it all. As you listen to each part of the announcement: “Do not be afraid” — Impossible. “You have found favor with God” — Impossible. “you will conceive in your womb and bear a son” — Impossible. “He will be great, and will be called the Son of the Most High, and the Lord God will give to him the throne of his ancestor David.” Silence. “The child to be born will be holy; he will be called Son of God.” Silence. “And now, your relative Elizabeth in her old age has also conceived a son; and this is the sixth month for her who was said to be barren. And just as she may have been about to actually say it out loud – “impossible!” . . . . she hears, “For nothing will be impossible with God.”

Nothing is impossible with God. Then Mary said, “Here am I, the servant of the Lord; let it be with me according to your word.” Then the angel departed from her.

At this point, we see a young woman, a girl, alone with what is the most important news the world has ever heard. She has, out of deep faith, said, “yes” to God. And we learn, in what follows, that she has studied her people’s prayer. She knows how to pray, and how to sing praise. “My soul magnifies the Lord!”

The prayer is an echo of Mary’s ancient ancestor Hannah, another Israelite woman who miraculously becomes pregnant.1 She knows that this God like to grant life where there should be none. Mary knows the stories, so when an angel turns up promising life to a girl with no husband, Mary responds with some of the most faith-filled words in all the Bible. Mary stretches her mind and her heart to imagine a God who looks with favour on the lowest, who does great things for unlikely people, who scatters the proud and lifts up the lowly. She believes that, at this moment, she is now in the presence of God’s son. . . in her womb. Mary then goes to her much older cousin Elizabeth – who understands – and they sing together.

Later, when we see Mary, she’s travelling, nine months pregnant, to meet the needs of the empire – she is going to Bethlehem to be registered. We know that there is no place for them there. They are vulnerable and no one helps them – expect to say, you can huddle out back with the animals. And there, the holy child is born. From the realms of glory, into flesh through a young girl with no standing in the world, into wrapping cloths that serve as blanket and diaper, to be set into the manger of the world. And there we behold him. We see what God is really like and we feed on his goodness, by faith, with thanksgiving.

There is a reason why Mary has her place in the Christian imagination. She is the first Christian. The first to hear God’s intention to take flesh and die, and to be raised, and she says, “Alleluia, yes, Lord.”

I think the most powerful image I’ve seen of Mary, and there are so many, is the one drawn fairly recently by Sister Grace Remington for the Trappist Religious Community of our Lady. Sister Grace doddles as she prays and came up with a drawing that the sisters used as their Christmas card. The image got online and it went viral. It is an image of Mary comforting Eve. Yes, all the way back to the beginning. Eve is clearly downcast still, in deep misery, still clutching the fateful fruit, the serpent still coiled around her leg, her long hair her only clothing.

Mary is facing Eve, one hand placed gently on Eve’s cheek, the other on her own pregnant body. Mary gazes on Eve with no judgement, only grace. She directs Eve’s hand to her swelling womb,to feel the truth, to know he has come, to make it clear that your sin – and every sin since – will be overcome . . . forgiven, in this new life. The two are locked together in this most meaningful embrace that binds together human misery and diving grace . . . in the flesh. One the ground below them, Mary’s bare foot is standing on the serpent’s head. As if to say,“It no longer has any power over you, Eve.”

I wonder if Eve then sang along with Mary, and with all of us, “My soul magnifies the Lord, and my spirit rejoices in God my Savior, for he has looked with favor on the lowliness of his servant.”

That’s all we need to do right now. Follow Mary’s lead. Be like Mary. Know the story, say yes to God, sing his praises, and treasure these things – ponder them in your heart.

May the God of infinite goodness scatter the darkness of sin and brighten you hearts with holiness: And the blessing of God almighty, the Father, the Son, and the Holy Spirit, by among you and remain with you always.

1 I’m grateful to Jason Byassee, in “Surprised by Jesus Again” (Eerdmans, 2019) for the following insights about Mary and other women of scripture. 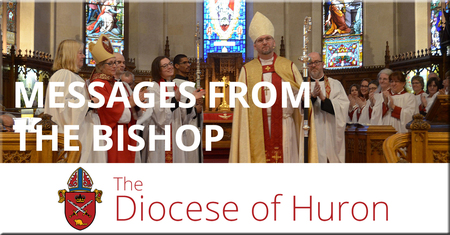