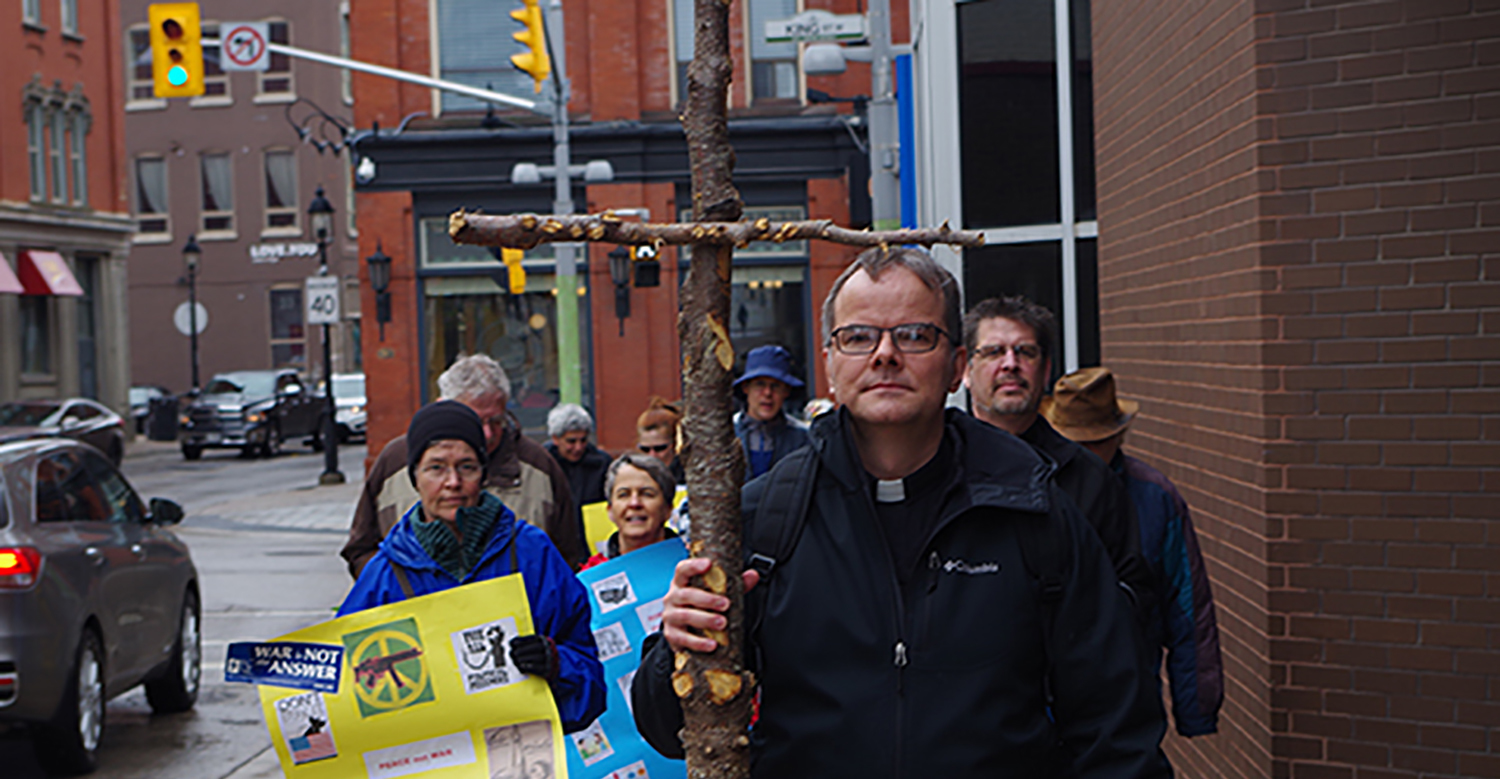 At vestries this past year Bishop Linda Nicholls challenged congregations throughout the Diocese of Huron to Stand in Solidarity with those living in poverty. This Good Friday, All Saints Anglican Church Waterloo joined with Christ Lutheran Church to participate in the Stations of the Cross in downtown Kitchener.

The theme for the stations was, Against the Forces of Death; Embracing the Faces of Poverty.

The two churches embraced the opportunity to draw attention to the unjust structures of society and to be a visible presence in the community. Stations included banks, the courthouse and jail, regional government headquarters, the statue of the begging Jesus, Money Mart, luxury condos, war memorial, Mary’s place and the Working Center.

The two communities made their way from station to station carrying the cross, reading scriptures and praying at each location. Discussions unfolded at each station.

At Regional Government Headquarters, Steven Izma noted “the choices politicians make surrounding transit are far too often for the privileged, the high tech sector and to get the rich too and from shopping quickly. Transit to factories or poor neighbours is just neglected.”

When reflecting on the predatory lending practices of Money Mart and other payday lenders, Sharon Summerville noted that “we have lost any sense of community morality allowing these places to exists.”

Oz Cole-Arnal, professor emeritus from Martin Luther University College reflected upon the gentrification of the downtown core, stating, “It isn’t urban renewal, its urban removal of the poor.” Pastor Marty Levesque of All Saints Anglican Church noted that gap in social housing versus the abundance of student housing is an indication of a class divide. “We readily build student housing for middle and upper-middle-class folks who can afford to send kids to university, but we refuse to build the most basic social housing, seeing no profit it.”

The Stations of the Cross concluded at the Working Center, world-renowned outreach ministries, which provide a myriad of services throughout Kitchener/Waterloo. Margaret Nally remarked that the Working Centers mission is “to help return dignity, reliance and humanity to each person who walks through the doors.”

While the rain held off for the two communities to finish the stations, each participate couldn’t help reflect that when it rains, or snows, many of the invisible population in the cities of Kitchener and Waterloo simply must endure. To date this year, as presented at the mayors’ dinner for St John’s Soup Kitchen, there have been over 25 deaths in the region to the population that calls the streets, jails, and The Working Center home. In 2018, the number of deaths for the entire year for this specific population was 35.