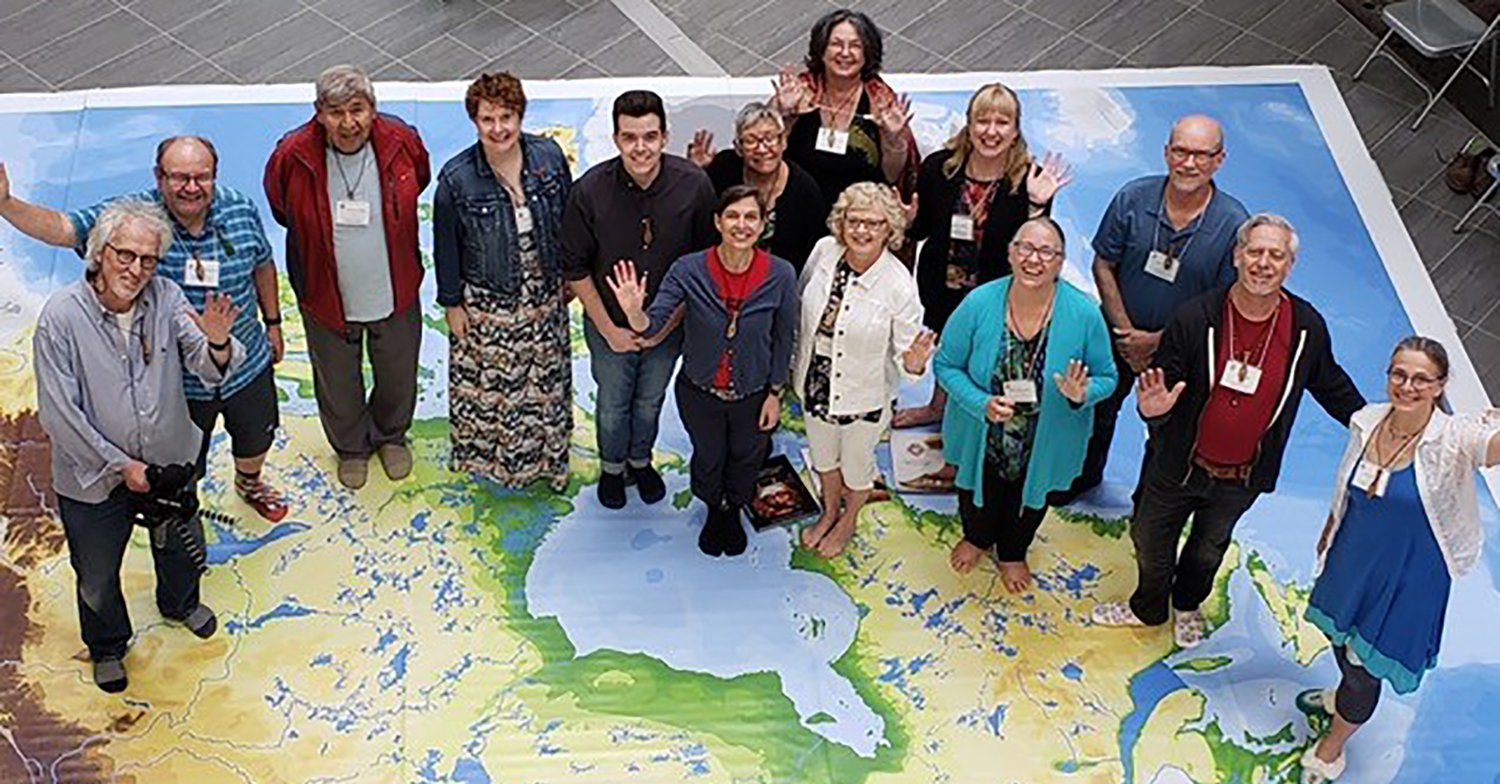 Since the release of the on-line version of “Mapping the Ground We Stand On”, in June 2021, 150 individuals in seven groupings from around the Diocese of Huron have so far participated in the exercise facilitated by Province of Ontario facilitators, Rev. Canon Greg Smith (Huron) and Cheryl Marek (Toronto).

When the Truth and Reconciliation Commission first laid out its calls to action in 2015, Recommendations 48 and 49 were specifically directed to churches.

Archbishop Mark McDonald has said that it is important for the reconciliation journey that churches avail themselves of a diversity of learning opportunities.  In response, PWRDF, which has long had relationships with indigenous partner organizations in Canada, decided it was important to produce a resource that could help.

Adele Finney, then Executive Director of PWRDF and Esther Wesley (Cree First Nation), then coordinator of the Anglican Fund for Healing and Reconciliation, teamed up to create an interactive exercise called “Mapping the Ground We Stand On”.  It was released and facilitators were trained in late 2019.

The exercise was organized around a floor map of the northern part of Turtle Island that we now call Canada.  The first part of the exercise invites an exploration of the names of some of the Indigenous peoples that have been present on the land for millennia and then for “settlers” to engage their personal family history of arrival and how they come to be here on the land now.

The second part of the exercise invites a deeper exploration of two elements of the relationship between indigenous peoples and settlers (or new arrivals), namely the Doctrine of Discovery and Indigenous Knowledge.  Along the way there are opportunities for participants to gather in sharing circles and to express their hopes and disappointments for the relationship between all peoples who now call this land “home”.

Of course, in early 2020, the COVID-19 pandemic struck, meaning that live gatherings were not possible for the duration of the worst of the pandemic.  No one suspected how long this would last.  Finally in early 2021 it appeared that the pandemic was not short term and so the staff of PWRDF set to work to adapt the mapping exercise as an online version that could be offered to groups of up to 25 participants via the ZOOM medium.

Using animation and video, the exercise attempts to offer an experience as close as possible to the original intent.

Since its release in June 2021, 150 individuals in seven groupings from around the Diocese of Huron have so far participated in the exercise facilitated by Province of Ontario facilitators, the Rev. Canon Greg Smith (Huron) and Cheryl Marek (Toronto). They have also been able to conduct one in-person exercise for 14 Camp Huron summer staff in a COVID safe environment.

So far, another 50 individuals from the Diocese of Niagara have also participated and there are more exercises being planned in the Diocese of Toronto.

Other PWRDF facilitators in the other ecclesiastical provinces are also rolling out the on-line exercise across Canada.

Many have expressed the mixed curse and blessing of this time of pandemic.

One of the blessings has been the learning that we can make use of the technology of our time in a good way.  It is likely that, while it is anticipated that the in-person version of Mapping the Ground will return, the on-line version will now continue as an option that makes the exercise accessible to more individuals without the necessity of leaving home or travelling across distances.