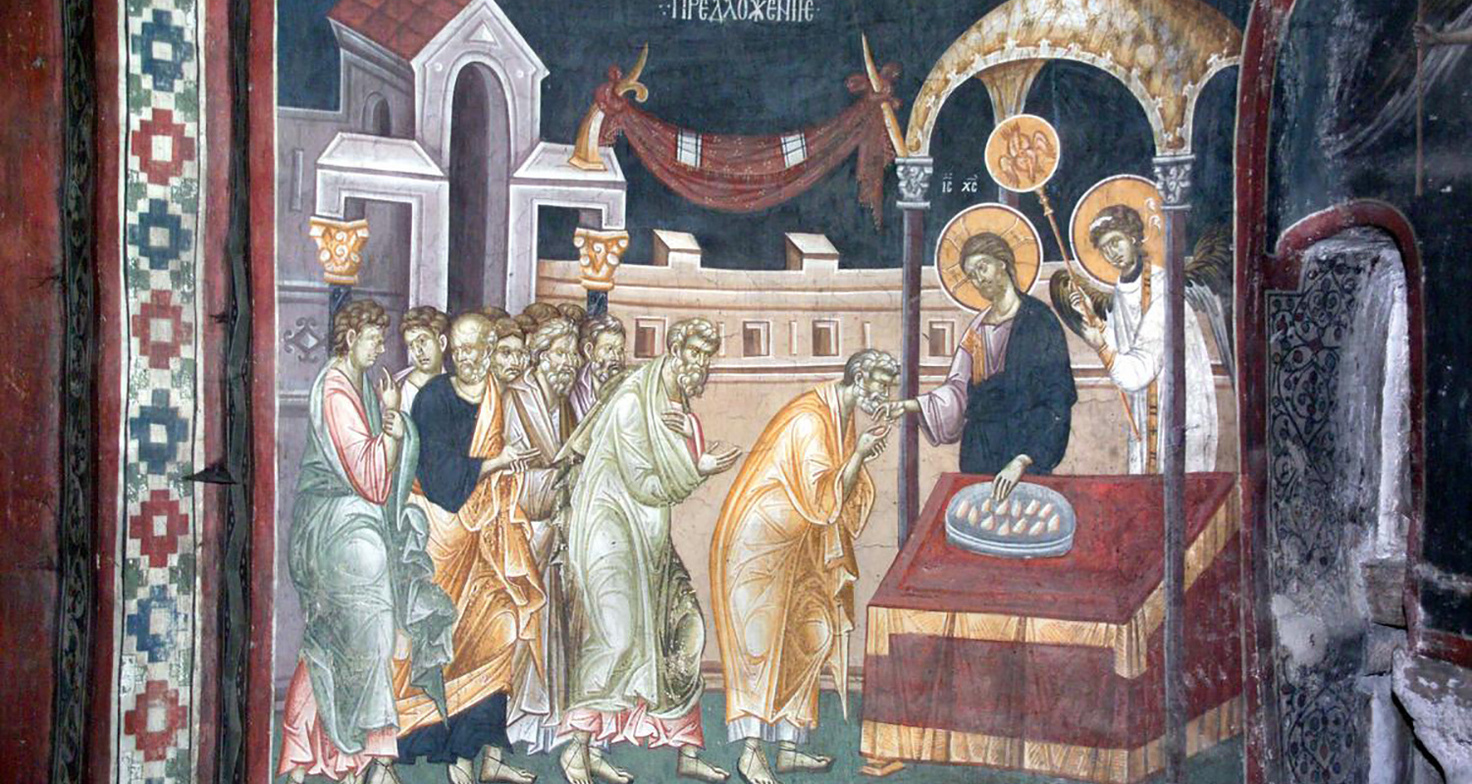 The eucharistic issue of receiving communion under one species (generally the consecrated bread alone) seems like a question of the last century in these days of COVID-19 eucharistic fasting, but in anticipation of the day when we return to the altar of God and common liturgical gatherings, it may be helpful to know a bit of the theological and historical reasons for what is known as the doctrine of concomitance (or the extraordinary reception of communion in one kind)

For almost all Western Christians in the 21st century (those whose primary liturgical inheritance stems from the Latin-speaking Church of the past 1500 years) communion under both kinds (bread and wine) is normative because of its scriptural basis (the commandment of Jesus), as well as the development of a common practice in the early history of the church.

The commandment of Jesus to “take and eat” with regard to the bread, and “take and drink” with regard to the cup (chalice), along with the fourfold action of the Eucharist: take, bless, break, give – now form an ecumenical standard (Eastern Christians also receive in both kinds because the bread is mixed into the wine in the chalice and given together on a spoon)

The other theological norm is that one does not take communion, one receives communion. This stands whether the bread is received in the hand or on the tongue, or in receiving the chalice from which one drinks, or receiving bread intincted from the chalice (Eastern) or from the hand of communion minister, who does the intincting if necessary. (see the rubric of communion in the BAS, “The celebrant and people then receive communion. The sacrament is given…” (page 213) or BCP, “then shall the priest first receive the communion…” (page 84)

Historically, the bread received in the hand was taken away from people (gradually and in different places), between the 7th and the 12th centuries (to be received only on the tongue), and the cup for the laity was withdrawn as early as that in some places, and certainly gone by the 13th century, resulting in an expanded theology of concomitance (the fullness of Christ’s presence under either species).

A number of Western reformers between the 15th and 17th centuries argued against communion under one form alone because it was contrary to the scriptural accounts of Jesus’ own actions, beginning with the Ultraquist arguments of 1414 in Bohemia. Within Anglicanism, Article 30 (of the 39 Articles) addressed the normative practice of not withholding the cup from the laity: “The Cup of the Lord is not to be denied to the Lay-people: for both the parts of the Lord’s Sacrament, by Christ’s ordinance and commandment, ought to be ministered to all Christian men alike”.

If a parish is rightfully offering both the bread and the wine to all its communicants, the question of self-intinction vis-a-vis communion in one kind seems moot. One can receive the bread in hand or on the tongue, and then drink from the chalice. The common cup, as well as a common loaf, are primary symbols of the unity of the church in communion with Jesus the Christ and with the body of Christ, the church. Bishop John Baycroft wrote passionately that “Jesus took one cup and gave to all of his disciples to drink”:

“[He] did not merely pour wine into the disciples’ individual cups and tell them to take a drink. There is a powerful challenge in this one…We are also reminded by the one cup that we cannot drink it alone. We drink from a common cup as a strong symbol of unity and our willingness to accept each other. We share our love and lives as we share the cup…the cup of love and unity is unavoidably a cup of sacrifice.”

The question of health issues has been addressed most completely by the Church of England in particular and is available in several places, with particular emphasis on the unhygienic practice of self-intincting, and applauding the general use of precious metal chalices, wiped after each communicant.

The theological teaching of concomitance

Over several centuries of Christian practice the doctrine of concomitance has been developed from different motivations, which can be summarized in this way: The doctrine of concomitance is at its heart both christological and sacramental. Just as Christ is fully human and fully divine, so in the Eucharist Christ is not divisible (one does not receive half of Christ in the bread and half in the wine, but rather all of Christ in both and either). The Eucharist contains the entire real presence of Christ in both the bread and the wine.

Christ commanded us to “take and eat” and “take and drink,” but when this is not possible (as attested to already in the early church), receiving communion in one form or the other is a complete reception. Part of thinking canonically is that when we make an exception it must then be permissible for other situations. The primary exception (in Anglicanism) is that we give communion in one element on a regular basis to the sick and dying. There has been a long-standing tradition of receiving in one kind related to communion with the sick, and particularly with regard to one’s last communion, viaticum. There, the argument has been if one is too ill to receive the bread, the cup will suffice, or vice versa. This emerges in Anglicanism from a medieval tradition that even ocular communion, or communion by desire, is valid reception if necessary:

“But, if a man, either by reason of extremity of sickness, or for want of warning in due time to the Curate, or by any other just impediment, do not receive the Sacrament of Christ’s Body and Blood: he shall be instructed that if he do truly repent him of his sins, and stedfastly believe that Jesus Christ hath suffered death upon the Cross for him, and shed his Blood for his redemption, earnestly remembering the benefits he hath thereby, and giving him hearty thanks therefor: he doth eat and drink the Body and Blood of our Saviour Christ profitably to his soul’s health, although he do not receive the Sacrament with his mouth.” (BCP 1962, page 584).

In more recent authorized liturgical books of the Anglican Communion, this is made even clearer: “Believers who cannot physically receive the sacrament are to be assured that they are partakers by faith of the body and blood of Christ and of the benefits he conveys to us by them.” (Common Worship: Pastoral Services, page 73). The logical development from this is reception under one kind as acceptable and full communion in these extraordinary circumstances: “If the sick person cannot receive either the consecrated Bread or the Wine, it is suitable to administer the Sacrament in one kind only” (1979 Book of Common Prayer, page 457) This is a valid exception to the normative pattern (or ordinary communion).

In addition to the long history of Anglican communion with the sick, there is also the more recent (and developing) practice around accommodating allergies, especially with gluten or wine intolerance. For the Anglican Church of Canada, these guidelines are most clearly found in regulations for joint Anglican-Lutheran Eucharistic liturgies: Regarding the elements themselves, “Lutherans traditionally use bread and wine in the celebration of the Lord’s Supper. In certain circumstances grape juice is used.”  It is not, however, the practice of the Anglican Church to use grape juice as an alternative to wine in the eucharistic celebration: “The Bread shall be the best and purest wheat bread, whether leavened or unleavened, and the Wine pure grape wine, wherewith a little water may be mingled.” While communicants in both churches normally receive from the loaf and the cup, both traditions affirm that under certain circumstances “the reception of only one element is acceptable.” While practices vary in our churches, “a loaf of bread and the common cup are rich biblical symbols of the unity of the church.” (Guidelines for Common Worship, Anglican Church of Canada)

Rev. Canon Dr. Lizette Larson-Miller is the Huron Lawson Professor of Liturgics at Huron University College and the Diocesan Liturgical Officer for the Diocese of Huron.