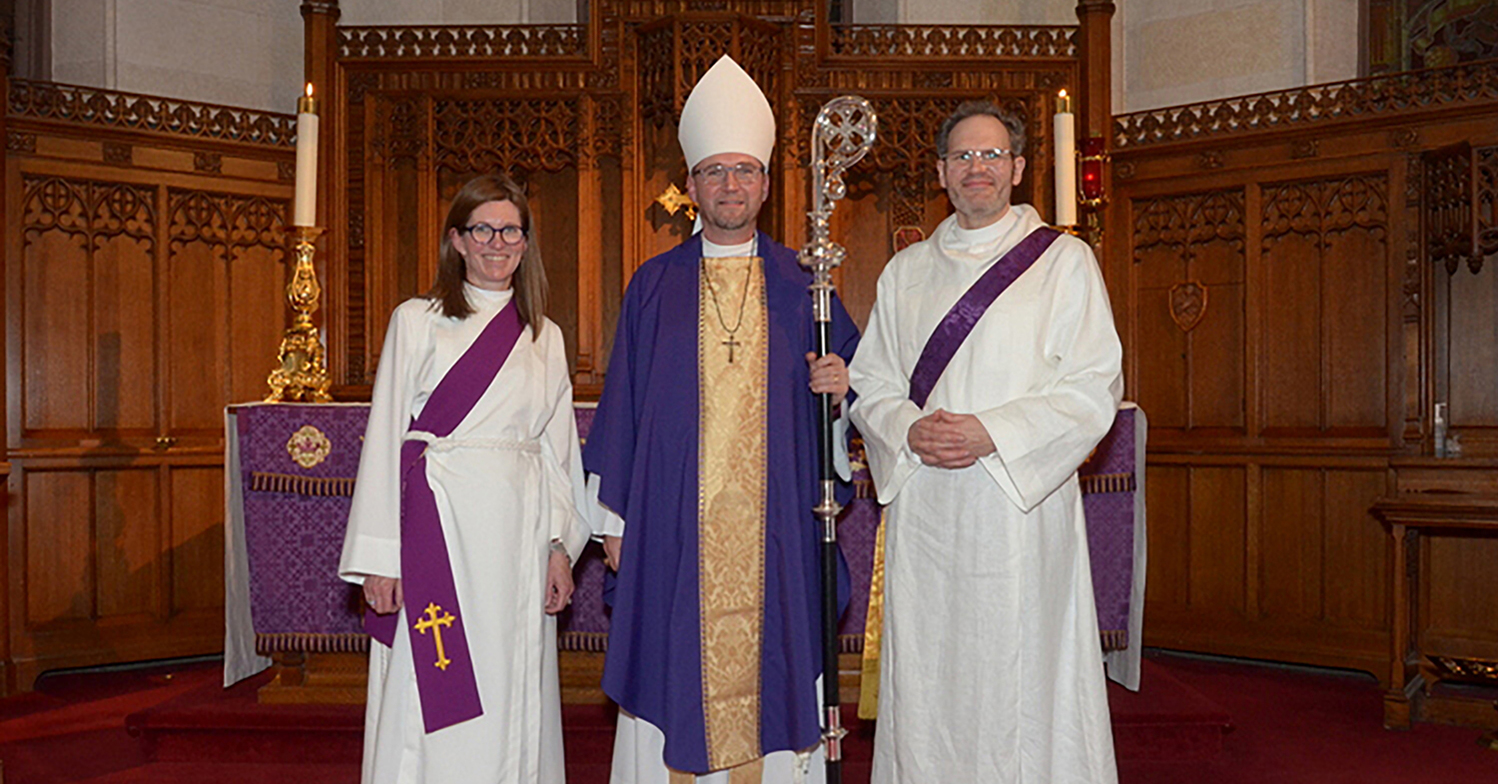 On the evening of March 4, 2020, the first of the Lenten ember days for the year, Andra O’Neill and I appeared on the threshold of the Cathedral Church of St. Paul in London (no, the other London). It was the evening of our ordination into the diaconate.

It was, in my estimation, a miracle that we were even there at all. A week and a half later all public gatherings and every divine service in the diocese of Huron was suspended: ordinations included.

Neither of us were particularly new to ministry, both were raised in the rectories of a pair of Christian denominations, both had been functioning as “incumbents” before the night, and both were returning to our respective parishes—newly vested in stole and Spirit— to continue a ministry already begun.  The tone of that evening (carried over from the episcopal elections and enthronement of the months previous) was one of resurrection. Even the preacher, Rev. Dr. Michael Knowles, addressed it (ensuring that we knew the difference between resurrection, resuscitation, and taxidermy).

New life was in the air, the church of Christ had been gifted with two new ministers by a new bishop, the Spirit of Christian ministry was planted in two new hosts by a grand liturgy, and we all (or at least I) expected more of the same. I expected new life and a renewed vigour for ministry. Knowles acknowledged the tone of the evening, and our renewed fervour “to preach in the power of the Risen Lord, to bring comfort to the afflicted, and lead the Lords’s people into the Promised Land“ (or something like that). I expected that the church would continue to live out its mission bringing resurrection (whatever that might look like) to the world around. Even in Lent.

Now, you should know, these post-ordination reflections follow a common pattern. Most times, the next sentences read something like, “but parish ministry rarely carries with it the grandeur of the ordination, and the hopes of resurrection often give way to endless meetings, budgets and fundraisers, funerals, chicken dinners, and locking up after the last have left” (the same trope doubles handily for weddings and marriage). Ministry, since that good evening, has not given way to drudgery and the mundane. The concerns of the church(es) are the same, but there is a difference.

In the past weeks, I have not struggled, necessarily, to seek out the Holy Spirit in the realities if ministry. Rather, I have struggled to find (or invent) the face and method of ministry in an age of distancing and isolation. And so, I have spent the last few weeks scrambling to find a way to keep people together, to maintain givings, to rally a distanced people around a common faith, to encourage prayer and self-giving, and to offer the read and reflected scriptures.  This has meant e-services.

Within hours of hearing the news that our churches would not be gathering on a Sunday morning, we setup a YouTube channel and recorded homilies, morning prayer, and pastoral encouragement. We finished a parish wide email list (there are five churches in the Parish of the Transfiguration). It has also meant “phone trees.” Within hours, I had spoken with wardens from each church (who reached out to their communities in turn), posted letters on doors, and made known our plans and efforts to compensate for the closures.

I have spent the weeks since calling parishioners, hearing the concerns of the familiar, and dialing even the most apocryphal entries in our parish list.  It has been exciting, in its own way, treading this new path of discovery. It’s been terrifying, on other ways, asking questions (how are we one at a distance?) that seem to rub against our most deeply held sensibilities (can you name an Anglican televangelist?).

But behind the flurry of action, the pushing of technology, and feverish reaching out, is the fear that COVID-19 will cause irreparable damage (or even death!), not only to human bodies but to our church. The crucifixion that I’ve been trying to avoid since the day of my ordination is not the drudgery of ministry after the majesty of ordination but the dissolution of the whole works in my own feeble hands. And in wrestling with this (completely rational!) fear, I have come to grasp the meaning and function of my ordination.

The grandeur of an ordination: St. Paul's Cathedral, London, Ontario

The grandeur of an ordination does not ask to be repeated weekly, its liturgy is not the pattern for parochial ministry (not even at the Cathedral). Everything about that day shouts “remember!” And I do. I remember the reading from Isaiah, “Do not tremble do not be afraid, you are my witnesses, is there any God besides me?” I remember the reading from 1 Peter, “You are a chosen race, a royal priesthood, a holy nation, God’s own people, in order that you may proclaim the mighty acts of him who called you out of darkness into his marvelous light.” I remember Dr. Knowles pulling these two and so much experience together to say:  “The purpose of the pastoral office is to bear witness to the reality of God . . . Only Jesus can [save the church], so your task is simply to know Him well enough, to walk with Him closely enough, to rely on him fully enough, to be able to bear witness to who He is and what He has done for us.  Your task as a witness is to let Jesus do the heavy lifting.  Anything more than that is perjury.”

This changes nothing and everything. I will still look for ways to draw these people together. I will still pick up the phone to call the familiar and the forgotten. I will still preach to a camera and offer words to be read aloud from our parishioners’ screens of choice, and I will still encourage others to reach out and pray for one another and God’s holy church. But I will understand the tasks that these feeble hands are put to a little differently. I have hands to point, not uphold. I have words to proclaim, not convince. I have a heart to love, not to heal. And I am called to witness, not to save.

In the days and weeks following my ordination, life has not carried on as usual. The challenges have been a little different, but the trope is just the same. Now, as ever, we rise as witnesses and fall as saviours. The calling is the same. The work of the Spirit in her church is the same. The work of ministry, the variables and voids of our labour, shift and sway to meet the times. But they are, in every instance, only and ever a witness to the work of Christ. We look to Christ, we listen, and we repeat. We pray for pure hearts and for strength. And we offer ourselves to the God who gives our church its name. Because everything else is perjury.

Rev. Justin Comber is the Deacon-in-Charge of the Parish of the Transfiguration (Ridgetown, Aughrim, Florence, Highgate)