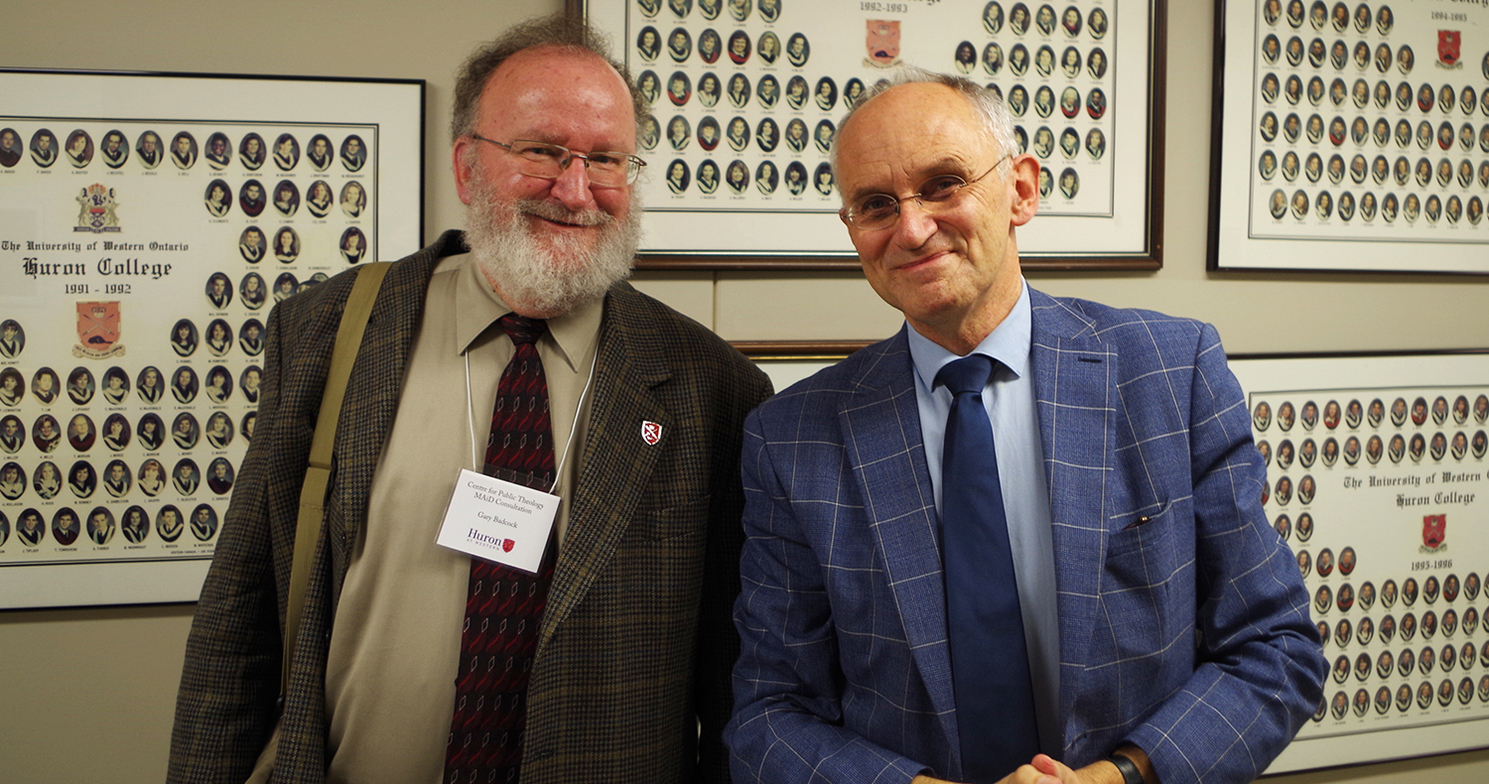 Not all is straightforward in the MAiD debate: Dr. Gary Badcock (left) and Dr. Theo Boer, one of the participants at the consultations on MAiD organized by Huron’s Centre for Public Theology (Huron University College, London, Nov. 29 and 30)

On November 29-30, a theological consultation on “medical assistance in dying” (MAiD) for Canadian Anglicans was held at Huron University College, under the auspices of Huron’s Centre for Public Theology, and with the generous support of the Anglican Foundation.

MAiD in Canada stems from events in February 2015, when the Supreme Court of Canada ruled in the case Carter v. Canada that the long-standing Criminal Code prohibition of physician-assisted suicide was a violation of the Canadian Charter of Rights and Freedoms. The Canadian government was given a short window by the Court to set an appropriate legal framework for medical euthanasia in place.

Following a rather brief period of fourteen months of consultation — in which the churches, among others, were heard and frequently ignored — Parliament passed legislation permitting “medical assistance in dying,” or MAiD (Bill C-14), which received Royal Assent in the summer 2016.

The developing story of MAiD in Canada has been marked by rapid change, the implications of which are as yet unclear. Considerable pressures have been brought to bear on government over the past three years for a relaxation of the regulations surrounding the practice.

This has come from special interest groups but also from individual patients through the courts, culminating in the recent Truchon judgment in Quebec, which struck down as unconstitutional the provision that the death should be reasonably “forseeable.” In the recent Federal election, both the Liberal Party of Canada and the New Democratic Party committed to a relaxation of current restrictions surrounding MAiD, and presumably, we can expect legislation in the new Parliament.

Not all is straightforward in the MAiD debate. Palliative Care specialists are, for instance, often hostile to the practice, insisting that there are better ways to die with dignity than through euthanasia. Some cases have been contested in the courts. There is also the precedent of more longstanding European practices of medical euthanasia in jurisdictions such as Holland and Belgium, where there is evidence of a “slippery slope,” even where the medical grounds cited are far from compelling.

In the midst of this stands the Church, most obviously in its pastoral role in caring for the dying and the grieving — but also for the caregiver, the physician, the legislator and the citizen too. How do we respond? For this we need to have thoughtful theological resources available. While our society works at suicide prevention among young people and First Nations groups, for example, we find ourselves also assisting in the suicides of thousands of people a year. Is this a contradiction, or is it a coherent and responsible option in today’s world? In its witness to the world about God’s love in Jesus Christ, and about the reflection of that love in the fulfilment of our duties to one another, what do we need to be saying and doing in these matters?

Canadian statistics on euthanasia 2016-2018: According to Health Canada’s latest report which covers the period down to the Fall of 2018, the numbers of patients receiving MAiD have more than doubled annually since the legislation was introduced, with a total of nearly 7,000 deaths down to October 2018 reported. MAiD is often occurring in people’s homes (42%), at a rate only slightly below the hospitals (44%). Patients requesting MAiD are spread across age groups; though the average age of people requesting MAiD is 72, deaths are reported from age 18. The single largest medical circumstance reported is Cancer (64%), with Heart and Lung (16%) and Neurodegenerative conditions (11%) making up most of the remaining cases.

The Centre for Public Theology has been part of Huron University College’s Faculty of Theology since 2008. Conceived as a way of bridging the divide between the theological academy and society, and of garnering research funding, the Centre exists to promote and sponsor theological research and publication on issues of public concern in Canada. The Centre also encourages theological research by students, particularly in Huron’s MA in Theology program, a two year research degree that includes a 25,000 word thesis. To date, the Centre has worked on and disseminated research about the Afghanistan War, HIV/AIDS and the Churches, Climate Change, the Financial Crisis of 2008, and MAiD, in research funded by the Social Sciences and Humanities Research Council of Canada. The project on MAiD is the last in the Centre’s current SSHRC-funded series.

Dr. Gary D. Badcock is Peache Professor of Divinity at Huron University College and a founder member of Huron’s Centre for Public Theology.