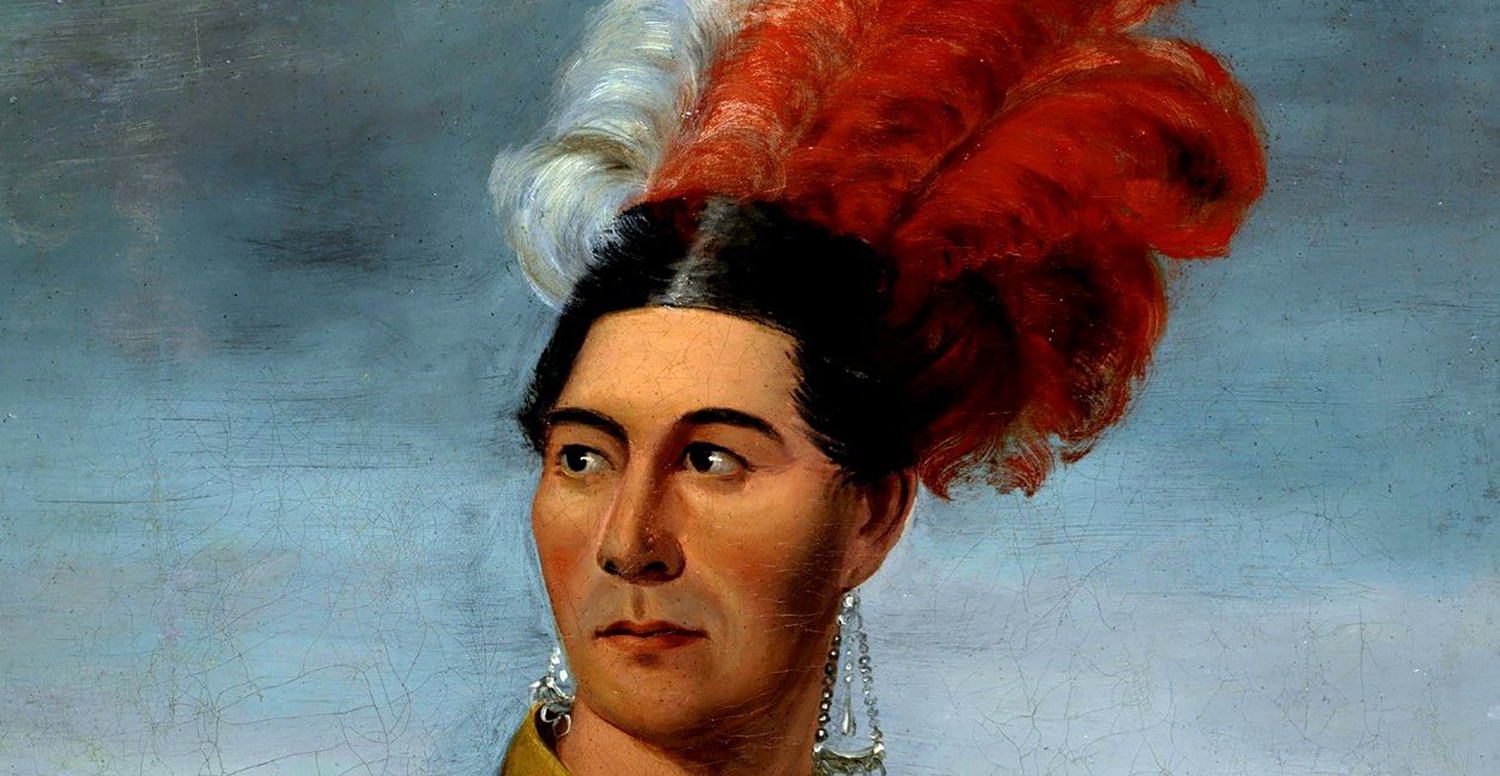 As the era of colonial warfare in North America ended after 1815, fundamental questions arose about the future of indigenous peoples which both native and colonial leaders had to address.

The natives’ primary role as military allies was over. How would they now conduct relationships with government officials and what new policies would those officials create? Massive social and economic displacement seemed to lead to racial discrimination, poverty and alcohol abuse. Sharp population declines seemed to place the very future of native peoples in question. Would traditional forms of native leadership be able to meet these challenges?

Raised in the Grand River community as a youngster, he moved to his father’s new home in Wellington Square, now Burlington, at the head of Lake Ontario, in 1802. John’s mother was the redoubtable Catharine Brant, the daughter of the influential Ohio Valley trader George Croghan and his Mohawk wife, an important figure in the Turtle Clan.

Catharine preferred the traditional community of Grand River and her status there as a senior Mohawk matron. She remained there until her death in 1837, while John returned to Burlington, living in his father’s manor house until his own death in 1832.

Educated at schools in Ancaster and Niagara, the younger Brant fought in several key engagements during the War of 1812, including Queenston Heights, Beaver Dams and Lundy’s Lane.

Following the conflict, he pursued his father’s dream of gaining freehold title to the Grand River lands for the Six Nations. In 1821-22, he travelled to England with his brother-in-law, Robert Johnson Kerr, to argue this issue before imperial officials. The efforts of the two men were unsuccessful.

Returning to Upper Canada, Brant worked tirelessly to create schools in the Grand River community, believing that education was key to his people’s future.

Like his father, John Brant was a man of two worlds. It was not surprising, then, that he was chosen by the Indian Department, itself going through a process of reorganization, to be the Superintendent of the Six Nations at Grand River.

Assigned the post on 25 June 1828, he occupied it until his untimely death on 27 August 1832. Brant’s career reached its high point in these years with two other appointments at nearly the same time.

Through his mother’s influence, he was confirmed in 1830 as Tekarihogen, the senior chief of the Six Nations. Highly esteemed locally, he ran successfully in the Upper Canadian election of 1830 for the riding of Haldimand’s seat in the province’s legislative assembly, being sworn in in January, 1831. His tenure, however, was brief: he was disqualified a month later on a legal technicality. In August 1832, he died unexpectedly, a victim of the cholera epidemic which swept the colony that year. He was only thirty-seven.

John Brant had to contend with many controversies and discouragement during his career. Massive colonial immigration beginning in the 1820’s created a recently-arrived settler population with no appreciation of the Six Nations’ historic role in the development of Upper Canada. Some traditionalist elements at Grand River resented and distrusted the Brant family’s continuing influence and, as they saw it, John’s conflicting leadership roles. One of the foundation stones which sustained him in these tensions was his Anglican faith. His grave lies next to the Mohawk chapel in Brantford, beside that of his father.

John Brant’s accomplishments were extraordinary, producing a tantalizing view of a future that might have been. He was a senior member of the Mohawk community who served as its government superintendent and who took full part in the colonial politics of the day. The course of nineteenth-century aboriginal-settler relations might have been transformed had he lived longer.

Rev. Douglas Leighton is the canon historian of the Diocese of Huron.