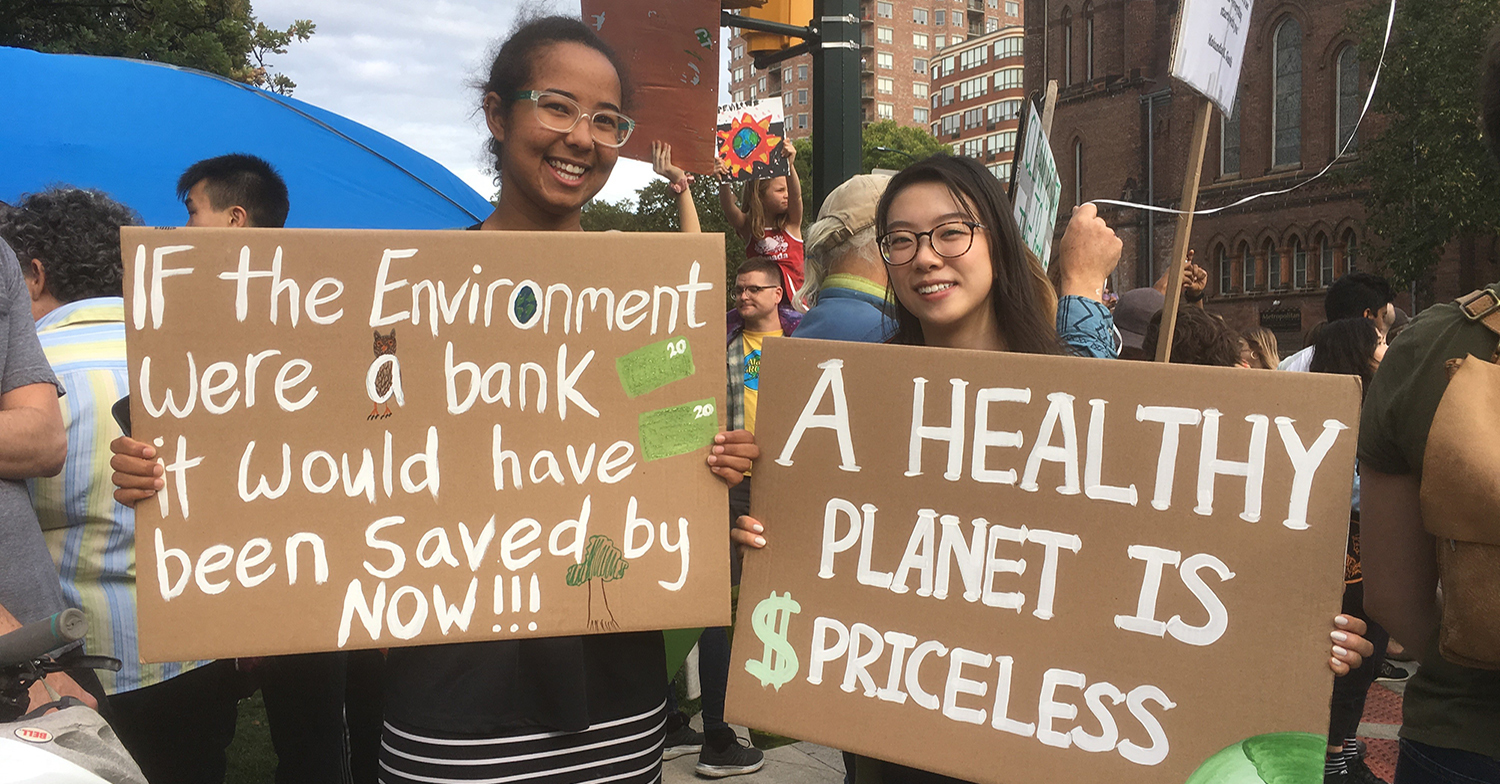 Change is coming: Anglican churches in Huron participated in Global Climate Strike on September 20 and 27. On September 27 thousands of people gathered in London and Waterloo. Here is the story from London.

The Earth is a marvelous, complex, and beautiful gift.  It is an amazing, living, breathing, giving gift.  It was our first gift, but not our last.

I am studying through the University of Guelph and the more I learn about the planet, the more I am in awe at His love, His attention to detail, His joy, His forethought.  I am sometimes speechless and overwhelmed by what He provided all His beloved creatures.  And the more I learn about how, in the last 200 years, we have nearly destroyed this gift given by a loving God, the more alarmed and ashamed I am, at our actions, and at our complacence and our ignorance.

Have you noticed that the fall is warm this year or that, in Europe it was really hot, or that when it rains, it REALLY rains?  Have you seen the videos of Hurricane Dorian or the devastating fires in the Amazon, the Arctic, Australia? That’s Climate Change.

Climate change is the planet’s biggest crisis.  It is, amongst all the horrible acts of terror humans commit against others on a daily basis, still, our biggest threat today.  As Greta Thunberg has tried to tell us, “our house is on fire,” and we are not reacting.  We are pretending that the smoke we smell is someone else’s problem, and the heat we feel will go away and all will be well, but the house is burning and the fire will eventually reach us; and while we ignore the fire, others are being badly burned by it.

Greta Thunberg is a well-spoken and passionate teenager from Sweden who is taking the planet by storm.  She started by protesting outside the Swedish parliament, striking from school, and a year later, on Sept 20/19, over 4 million people marched on their places of government, demanding change, now.  We marched in London, too!  The students came out to City Hall, yelling until their throats were raw “What do we want? – Climate Action!  When do we want it? NOW!”  They crowded the streets, blocking traffic, carrying signs, and proclaimed they care.  On Sept. 27, we did it again. Our London crowd grew from approximately 350 the first week to over 3,000 the second week. The worldwide crowd grew from 4.5 million to over 7 million. Some of us believe that our generation are responsible for this mess and it’s up to us to stop it.  Some of us want a future for our children and our grandchildren.  This isn’t a problem that ‘might’ affect the future unknown unborn generations.  This problem is here and it’s now and it isn’t going away.  Species are going extinct around the world, and we could be one of them soon enough.  This sounds frightening and even unrealistic, but the science doesn’t lie.  There is no debate in the scientific community – Climate Change is real and 97% of thousands of scientists point the finger at us, humans, for causing it.  The IPCC’s (Intergovernmental Panel on Climate Change, a UN body) report “Summary Report 1.5oC” is very clear.  We are in trouble and we caused this and we need to act now, because we can avert disaster.

Much of the change in climate is attributed to fossil fuels – the digging for them, the burning of them, the transporting of them… anything you do with a fossil fuel is causing the release of carbon into the atmosphere, which is staying high above us and creating a blanket, reflecting and trapping heat back to the earth.  Deforestation is wreaking havoc in lands where vulnerable peoples are being driven from their homes and livelihoods by fire.  The trees were sequestering carbon and providing homes to life; thousands of acres are now gone.  The oceans are warming and marine life is at risk.  Glaciers and ice packs are melting and the sea level is rising.  Millions of people will be displaced by this alone.

I am saddened, but I am not ignorant anymore. We caused this, it’s our job to fix this.  I ask His forgiveness and I move forward.  And so I took up my sign and I marched on Sept 20th and 27th, with millions of other fellow planetary citizens. It won’t end there.  As Greta told the UN, emotionally and powerfully, “change is coming, whether you like it or not.”  Let’s choose the change, let’s make it right, let’s protect His gift.

Upcoming events - Diocese of Huron, June 30, 2022 Heading to McDonalds, ending on the road with Christ Our Confirmation journey