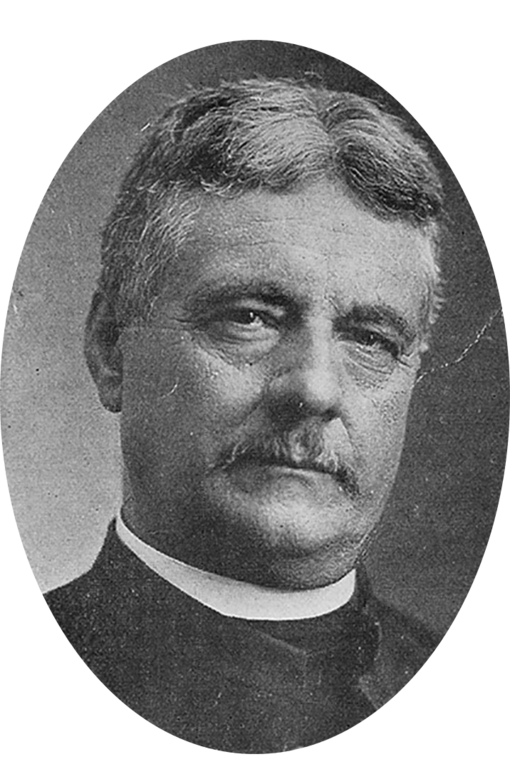 Huron University College has graced its second, present site on the west side of London’s Western Road since 1951.

Designed in 1937 by the renowned London architect O. Roy Moore, its construction was delayed because of the Great Depression and the Second World War. Paid for entirely by Anglican fund-raising, the new building modelled a residential academic community, with living spaces for students, faculty and support staff, as well as classrooms, a library and a chapel.

Though altered over the ensuing six-and-a-half decades, the building still reflects its roots. Second-floor academic offices were originally staff bedrooms which contain closets with doors that sometimes have interior towel-racks. The north end of the building was a two-and-a-half storey principal’s residence, complete with separate entrance, attic and basement recreation room. The Faculty of Theology has offices in what were once its second-floor bedrooms, while the Dean’s office and support staff occupy the former kitchen, study and dining room. The basement “rec room” has become a faculty lounge. The living room, with its expansive east-facing windows and fireplace, now houses a long conference table as well as upholstered chairs and is used for meetings and small gatherings. A wall plaque points out that the room’s original refurbishment was donated by “an anonymous admirer of the late Archdeacon Sage”. A late-career photograph of George Sage is nearby.

For generations of students and visitors, this room has been known simply as “The Sage Room”. The man for whom it is named made extraordinary contributions to Western University, Huron University College and St. George’s Church on Wharncliffe Road North in London. George Bloomfield Sage was a native of Brant Township. Born in 1855, he was educated at Brantford High School and then entered Trinity College, Toronto, where he received degrees in classics and mathematics and in theology.

Bishop Isaac Hellmuth brought the young scholar to London in the later 1870s to teach at Hellmuth Ladies College, just as Western University was being formed. Sage became the first secretary of Western’s Senate after the university’s foundation in 1878.

The early 1880s were not easy years for Western. Bishop Hellmuth, its founder and guiding light, resigned suddenly and left London in 1883. An economic downturn nearly caused the university to close. While Medicine barely survived, Law did not, and Arts did so only because of financial and academic support from Huron College, a scenario which would be briefly repeated during World War I.

George Sage played an important role in this time of institutional interchange. Appointed professor of apologetics in Huron College as early as 1877, he joined the university faculty as professor of mathematics and English literature in 1881, becoming a lecturer in the Department of Philosophy in 1898 and staying in that position until 1937.

Continuously intellectually engaged, Sage earned a doctorate in divinity through the Anglican Church’s General Synod in 1909. Western University recognized his long and distinguished service by granting him an honorary Doctor of Laws in 1929.

This love of academic involvement crossed into the next generation of the Sage family. George’s son Walter, born in 1888 and raised in the rectory on Wharncliffe Road, became a prominent Canadian historian, spending his career at the University of British Columbia and serving as president of the Canadian Historical Association in 1944-45.

Concurrent with these academic challenges and developments, Anglicans in the Petersville section of London, centred on the intersection of Oxford Street and Wharncliffe Road, began the formation of St. George’s parish.

Ordained in 1881, George Sage had obtained parish experience in the suburban communities of Byron, Lambeth and Hyde Park. Bishop Maurice Baldwin appointed him as the second rector of the still-forming Petersville congregation in the later 1880s.

Here he would remain for the next fifty years, overseeing the completion of the church building and the expansion of its facilities for the next half century, resolutely maintaining an evangelical or “low church” tradition. These buildings are still visible. The church, rectory and modified parish hall still stand on the east side of Wharncliffe Road, just south of Oxford Street. George Sage’s personal and pastoral gifts endeared him to generations of St George’s parishioners.

He cared for them through wars and depressions and rapid city expansion. Young families drawn to St. George’s in its formative years remained in the congregation as daughters and sons replaced parents. An active Sunday school reached children of all ages, ranging from the preschoolers of the Little Helpers group to those in various levels of the scouting movement. Discussion groups provided forums for questioning adults. The Diocese of Huron recognized his outstanding leadership by making him a Canon of St. Paul’s Cathedral in 1912 and Archdeacon of London in 1923.

Even as he aged, George Sage radiated an energetic kindness which had a lasting effect on all who met him. One parishioner, born into the congregation in the last twenty years of Sage’s ministry, affectionately recalled his influence forty years after the beloved rector’s death.

George Sage’s career exemplifies the tradition of intellectual inquiry, community service and pastoral care which is central to Anglicanism. One of the founding figures of Western University, his portrait, painted by London artist Clare Bice, hangs in its precincts. Huron University College rightly honours his memory in the space which bears his name.

Rev. Douglas Leighton is the canon historian of the Diocese of Huron.