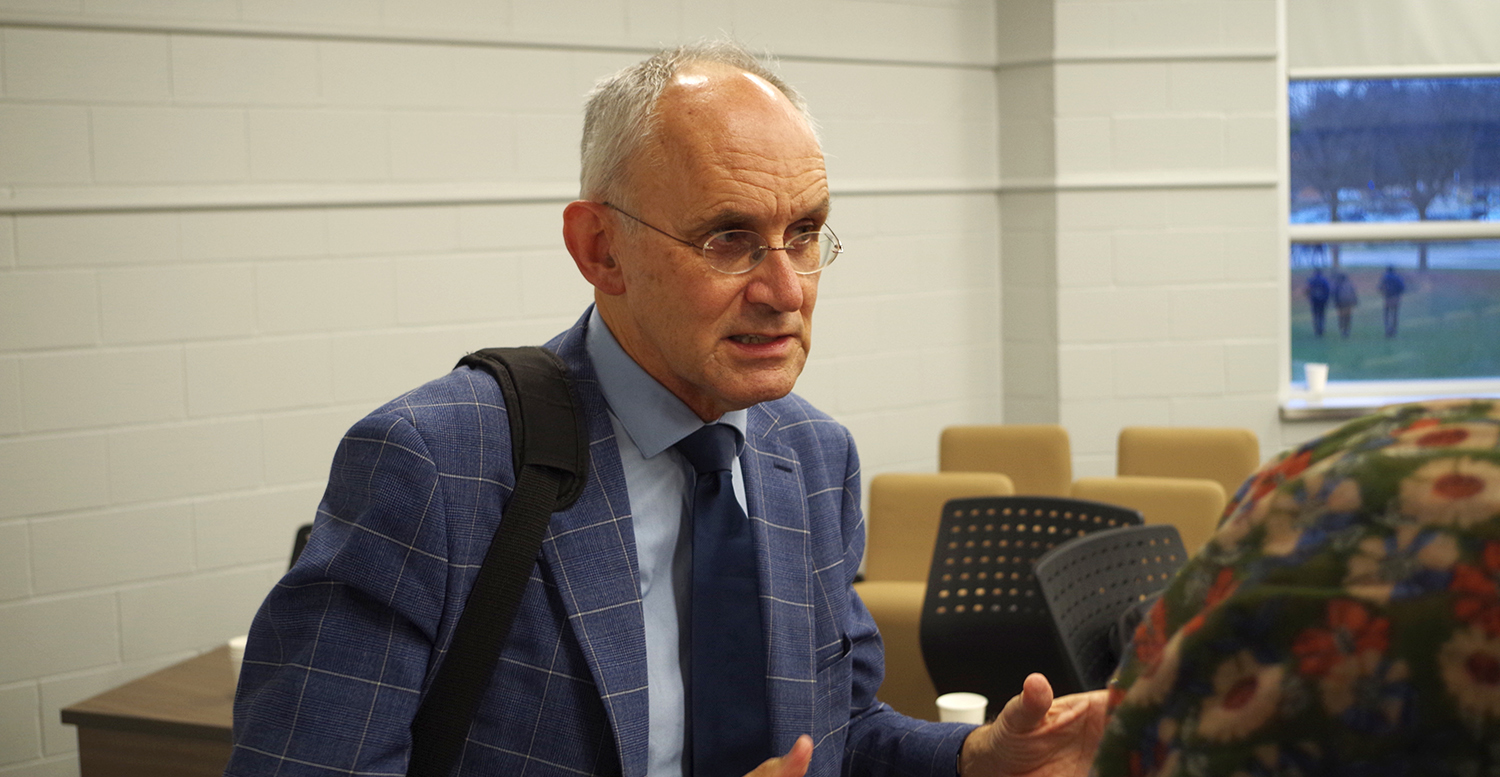 “We live in a culture in which death is a solution to any unbearable suffering.” – Dr. Theo Boer

Huron Church News in conversation with Dr. Theo Boer, the Dutch theologian and the professor of health care ethics, at the medical assistance in dying (MAiD) consultations for Canadian Anglicans at Huron University, November 29-30

Legalization of euthanasia is an outcome of a democratic process that we should respect but having medically assisted dying legalized does not mean that the moral discussions should stop.

This is one of the main takeaways from a two-day theological consultation on medical assisted dying for Canadian Anglicans organized by Huron’s Centre for Public Theology (November 29-30) and certainly the key component in the presentations of one of its most distinguished protagonists Dr. Theo Boer.

The Dutch theologian and the professor of health care ethics shared his views on medical assisted dying which includes ten years of studying euthanasia cases in the Netherlands where he was a member of the Euthanasia Review Committee. This involvement gives him a unique perspective to weigh in on moral consequences of the euthanasia law:

“All too often a legal arrangement is the end of a moral discussion and the legal arrangement establishes new norms where we tend to forget that the law is a result of weighing different values. My point is that with euthanasia we should always be aware that it is never an easy decision, not even for those who are for it.”

This difficult decision, in Dr. Boer’s opinion, should be reached by “weighing on one hand a patient’s autonomy and compassion and on the other hand that life is worthy of protection and that we should not be killing without a very, very good reason.” Understanding fully what this balance implies means recognizing the context of different values we need to consider when reaching the decision to end one’s life: the value we find in natural death; the value in learning how to cope with our vulnerabilities and difficulties; and the value of hope in human life.

Therefore Dr. Boer is adamant in stating: “I can imagine that we incidentally would condone a euthanasia decision but never as a default and never ever as a decision that goes without a moral unease.”

Changing the fabric of our society

Dr. Boer warns that legalizing euthanasia has become one of those decisions which could potentially change the very fabric of our society. In his own words, we live in a culture in which death has become “a solution to any unbearable suffering.”

“Euthanasia is becoming a default way to die, rather than a last resort”, he says pointing to the increase in the number of euthanasia cases in the Netherlands that he followed and studied as a member of the Euthanasia Review Committee from 2005 to 2014.

During the first years the numbers have been steady and the reasons why people would have euthanasia were limited to terminally ill patients. But after a couple of years, the increase in euthanasia cases was evident – in the end they tripled reaching close to 7,000 per year (plus a considerable grey zone) despite robust safeguards that the Dutch law on euthanasia contained. According to his research, the reasons why people opted for medically assisted dying also expanded and this has led him to believe “that euthanasia is very hard to contain.”

Explaining the process in more details he warns that a country like the Netherlands needs only a couple of years “to become used to the whole idea of an orchestrated death.” Once that has happened, says Dr. Boer, the process of normalization occurs, “where people think that death becomes a project.”

“Not only as a Christian, but also as a secular thinker, I believe that it is dangerous to see death as something that is in our hands. Even for secular people, there are certain things that happen to you, because if they don’t happen to you, it’s humans deciding who lives and who dies, and I’d rather have nature deciding about it”, concludes Dr. Boer. The Canadian process: too short for a good discussion

For the participants of the consultation it was certainly interesting to see where the Canadian law on euthanasia stands when compared with the decades of the Dutch involvement with this contentious issue.

In his two presentations on November 30, Dr. Theo Boer reminded his audience that the Dutch process was quite long and that it included several decades of debate within the Dutch Christian (Protestant) community. In comparison, the Canadian process of legalizing euthanasia “has been very short and has been very politicized.”

Dr. Boer mentions the recent (September 2019) ruling of the Quebec Superior Court which states that restricting medically assisted dying only to people who have terminal illness is unconstitutional.

“As much as I respect the court in Quebec – that’s one judge who decides that euthanasia should be available to all categories of patients”, says Dr. Boer arguing that the process was further politicized by the Prime Minister’s decision not to appeal the ruling.

Consequently, says Dr. Boer, in a very short period of time euthanasia has not only become legal In Canada but it has been extended to chronic patients and will be to people with advanced dementia, which shows that “a couple of years is way too short for a good, thorough discussion.”

Is euthanasia a patient’s right?

Dr. Boer also comments on the position of physicians and other medical professionals. In the Netherlands, says Dr. Boer, they already feel “undue and growing pressure to do euthanasia”.

“In Holland, officially it’s still the physician who makes a decision – of course, upon the patient’s request – but what the physicians become increasingly critical of is that patients presuppose that euthanasia is their right and that performing euthanasia is the doctors’ duty”, says Dr. Boer.

This, again, calls for a comparison with the Canadian position, where the doctor who refuses to perform euthanasia has duty to refer it to a willing colleague.

“Why would you have duty to do this if you think that euthanasia is wrong? How can you be obliged to refer to somebody else to do what in your eyes is a wrongness?”, asks Dr. Boer.

Another question that has been raised in the London discussions was if legalizing euthanasia could influence the quality of palliative care.

As a country which has first introduced the law on euthanasia, the Netherlands has received so much outside criticism “that we have done our outmost to make sure that the level of palliative care would become better and better.”

However, says Dr. Boer, there are some indications that the quality of palliative care could be in jeopardy in the future.

“One of my friends, a physician who regularly euthanizes his patients, says that if he got a cancer he would prefer to be taken into a non-Dutch hospital, because he knows that in other countries they would do anything to make him comfortable whereas in Dutch hospitals the availability of euthanasia may discourage us from seeking the best care”, says Dr. Boer.

He also knows of a patient whose insurance company on two occasions indicated that it would not pay for a life-saving medicine, and then recommended her to request euthanasia. And although in the Netherlands people, including politicians, are very much against such mechanisms that would favour euthanasia over palliative care his opinion is that “euthanasia would never be good for a country like US.”

As for the Church and its position, the Dutch theologian agrees that the Church should respect the fact that there is a secular law that allows euthanasia, but he also insists that within the law the Church has the right to act within its own values. The Church, says Dr. Boer, should stress hope and community and should very much support palliative care.

“The public task of the Church should be to stress the fact that euthanasia is never a one-dimensional decision. The Church should remind the country that it is at best the outcome of a conflict of values or a conflict of duties”, elaborates Dr. Boer. As soon as a society thinks that euthanasia is a one-dimensional decision, in which there is only patient’s autonomy, the Church needs to indicate that there are moral values, such as that the active and intentional killing of a human person remains a last resort, that vulnerable people should be protected, and that palliative care should be better.

His final message brings us back again to the necessity of the constant discussions in the matter of terminating one’s life before its natural end:

“Keep talking and do not forget that we as Christians believe that the world is one world, that the world is God’s world, and if something goes wrong in these discussions, we have to say, be careful, something is happening that should not be happening. And we should never forget that being vulnerable does not include only terminally ill, people with chronic pain or with psychiatric issues and dementia. We are all vulnerable.”