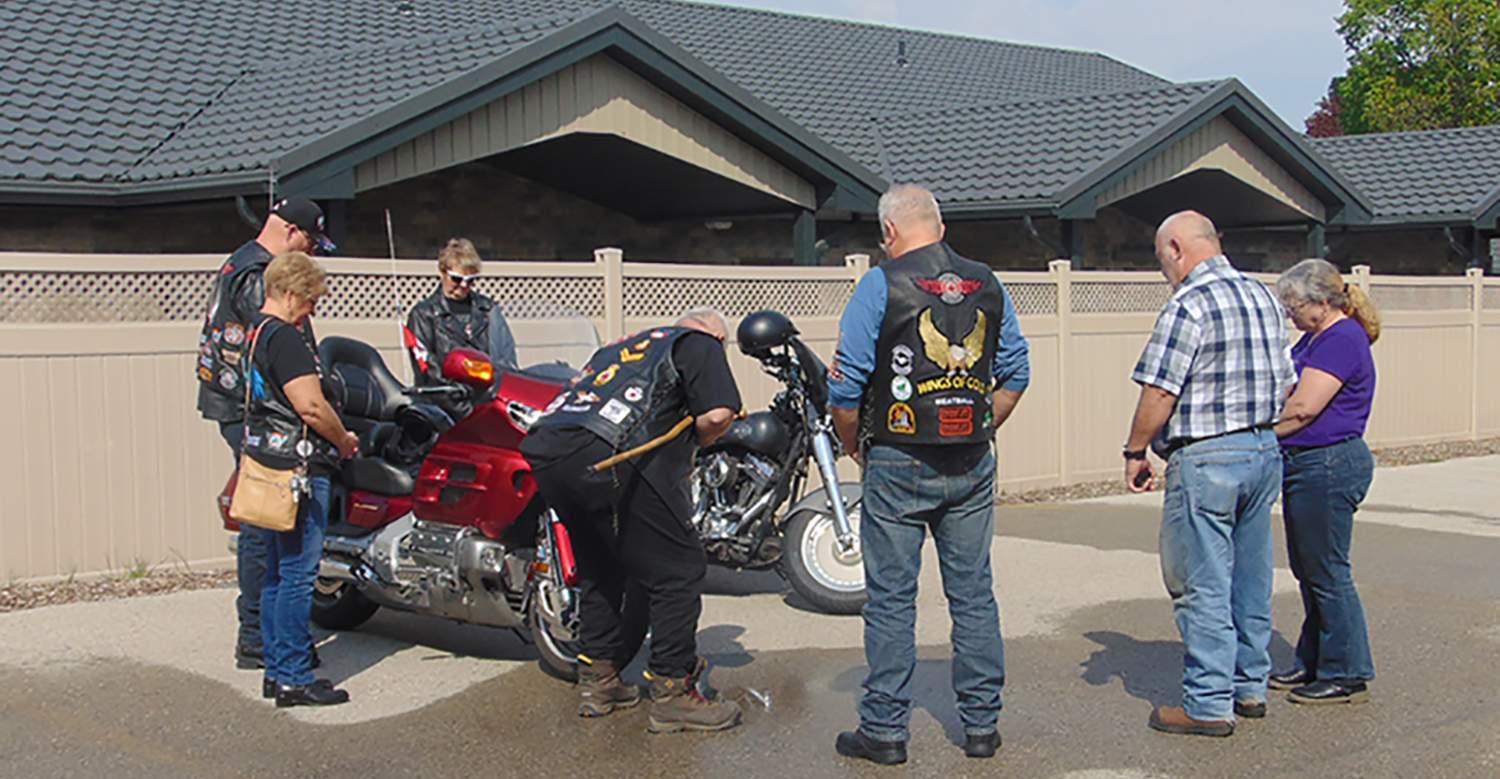 Rev. Steve Martin is blessing a motorcycle at the Breakfast with Bikers events in Strathroy on May 25.

Let me assure you it is not a case of a bike gang such as the Hell’s Angels arriving in town raising hell in the local hang out during the breakfast hour. It is not even the modern Christian version of Daniel in the Lions’ Den with the bikers on the menu.  This Bikers’ Breakfast was a most civilized and enjoyable experience that the most sedate Anglican would approve of (and that is saying a lot).  No bikers or even non-bikers were harmed during the event.

I found my introduction to the monthly Bikers’ Breakfast at St. John’s to be a most entertaining and educational event. Actually, the Bikers’ Breakfast, which began in September 2018, is the brain child of Greg McNair, one of the Lay Readers at St. John’s, and was enthusiastically embraced by St. John’s as a form of outreach to the community.  As Greg noted “There are no other breakfasts quite like this with guest speakers and with a religious flavour that I know of.”  The bikers come from the Strathroy area but I wouldn’t be surprised if this expands geographically-wise as the word spreads.  You wouldn’t know it by looking at Greg but he is a biker, or perhaps I should say, a rider of motorcycles.  Greg’s current ride is a 2003 Honda GoldWing.  However, the breakfast is open to all and you don’t have to be a biker to partake of the food and activities.

The breakfast itself is the work of a team of enthusiastic volunteers comprised of six or seven parishioners headed by Lyn Charlton. The menu this month was a wonderfully tasty version of French Toast which was enthusiastically and summarily devoured by all present.   The cost of the food is covered by a $7.00 donation from those in attendance and the honorarium for the speaker is covered by a Jubilee Grant.

In addition to the great breakfast, the event was, as I noted, also educational. Each month there is a guest speaker who usually speaks on a motor cycle theme.  The breakfast I attended had speaker Cal Zavitz, the senior road captain for the Canadian Motorcycle Cruisers, Strathroy chapter 021, covering the safety protocols for riding in groups.  Now, this is something that motor cycle gangs (e.g. Hell’s Angels) probably don’t worry about – but that may be prejudice on my part.  However, group riding, when done properly and safely, is much more involved than the non-biker realizes.  There are rules and lots of do’s and don’ts, and even a whole series of hand signals that are a match for a high Anglican worship service.  There are designated positions (perhaps the equivalent to the presider and sub-deacon) including Road Captains who are in charge of the route and leading the way and tail-gunners who bring up the rear to ensure that no lamb goes astray.

In all there are 12 general rules which you could say are the group bikers’ version of the Ten Commandments. The procession of bikers in the group is every bit as formal as any Anglican procession (and we Anglicans are known for our processions).  For example, the organized groups must be 100% alcohol free (rule #3 – unlike Anglicans who believe that Jesus was using actual wine at the Last Supper.)  There are also some very sensible rules for comfort as well as safety such as #12; Please ensure you have a full tank (of gas) and an empty bladder when you show up for group rides.

Finally, there are a series of hand signals which are used to communicate to all the bikers on the group ride. You have the usual ones that you might remember from riding the other kind of bikes (those with peddles) such as left turn i.e. the left arm extended out to the left.  But there are also ones I have never encountered before such as Emergency Stop which involves tapping the top of the helmet with a closed fist.

All in all, I was very impressed with the planning and organization that goes into a group ride when done properly to ensure the safety of those involved and the motoring public in general. The Bikers’ Breakfast is a great way to engage the church with the broader community and Greg and the other parishioners of St. John’s are to be commended on a great idea well executed.