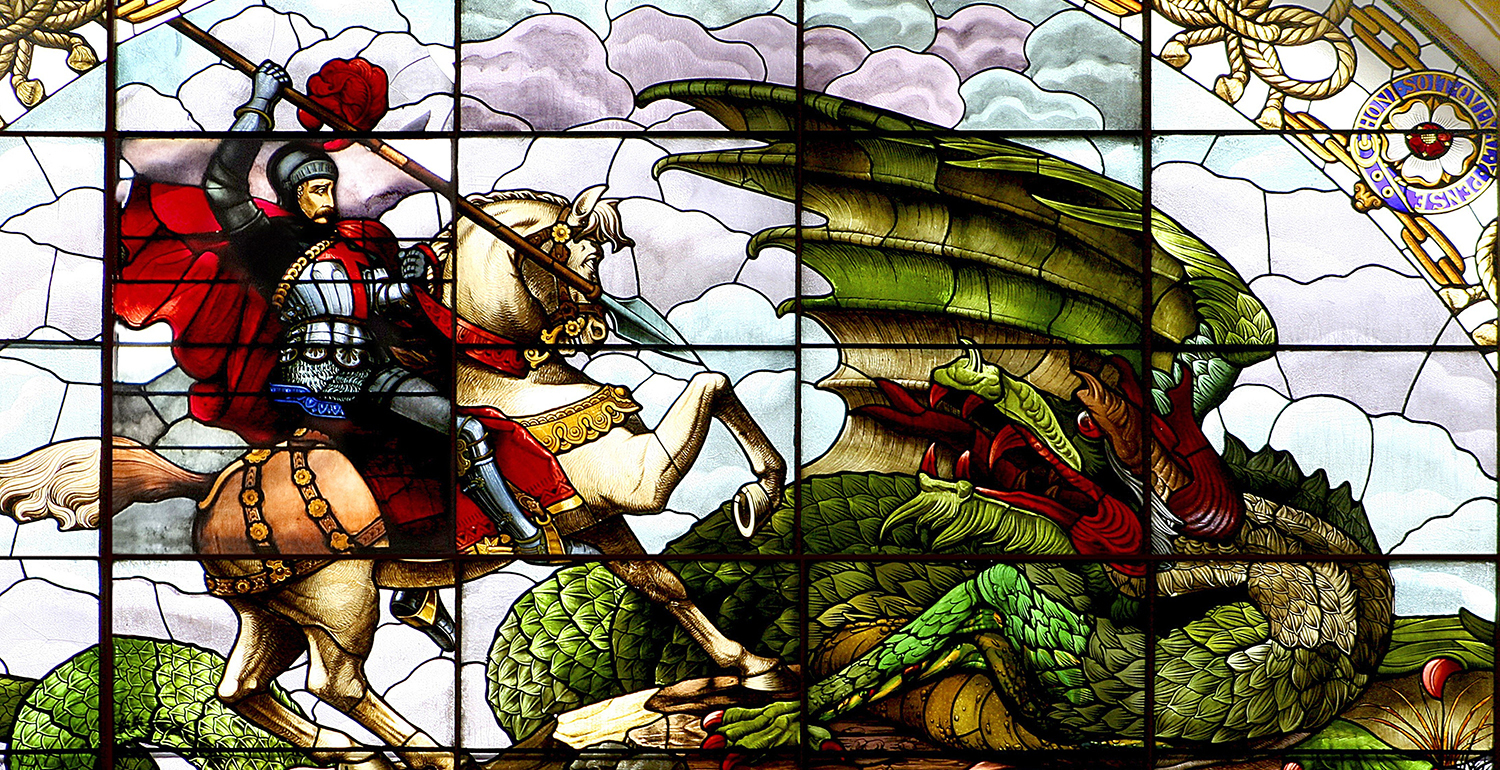 The details of his life are obscured by the mists of time.

Legends surrounding his deeds of valour and chivalry have been depicted in works of art known around the world. Nations, cities, and a wide variety of community organizations claim him as their patron saint.

His heraldic emblem is a red cross on a field of white. It is the symbol at the heart of the coat of arms which has been placed at the centre of the Cross carried by the Primate of the Anglican Church of Canada when in procession. The red cross has been worn as a sign of healing and as a means of identification on the field of battle.

His name is George.

Although the stories associated with his martyrdom in the fourth century are many, the simple fact which may be distilled from tradition is that, as a soldier, George, was commanded to offer sacrifice and worship the Emperor of his day. As a follower of Jesus, he did not consider an option of a meaningless outward expression of devotion, which would be open to interpretation, by some, as being offered in complete sincerity, to be a viable option. George chose to be faithful to the One who he had claimed as his Lord and Saviour. He refused to engage in worship of the Emperor.

His courageous act of faithful witness led to his death.

The stories which sprang up around him over the years, at their heart, hold on to a simple truth. George was a person whose faith and love for his Lord enabled him to accomplish mighty deeds and by those deeds draw others to an awareness that the Lord that George served, was one whose transformative power could be claimed by others.

George personifies a code of life which was called chivalry.

One of the facets of the definition of chivalry outlined what was expected of an ideal knight. The characteristics of courage, honour, courtesy, justice and a readiness to help the weak, were all important elements of the code of chivalry.

Militaristic images have fallen out of fashion within the life of the Church, yet at the core of the story of the Christian faith is a simple reality that there are times when bearing faithful witness to our Lord is not easy. The image of Saint George vanquishing the Dragon allows us to imagine what it is like for us, to confront the dragons we face in our own lives. There are times, not just moments read about in history books, but moments in our lives and today’s world, where being identified as a follower of Jesus is, at the very least, uncomfortable; and, in extreme circumstances… dangerous. To minimize that reality is to turn away from those, who like George, put their lives on the line as they declare themselves to be followers of Jesus.

In the Supplementary Instruction attached to the Catechism in the Book of Common Prayer (page 555), the Question is asked: What is the vocation of a Christian in this world?

The Response is: To follow Christ and bear witness to him; to fight the good fight of faith and lay hold on eternal life.

To be faithful to Jesus, in our own day and age, we are called to live with a sense of honour and courteousness. We are called to seek after justice and to help the weak. We are called to speak and act courageously in the name of Our Lord. It is not difficult to discern that these characteristics of a life of faith are reflected in the values of chivalry and help to provide a framework enabling the people of faith to turn the vision of the Marks of Mission into reality in God’s world.

The example of faithful witness offered by Saint George has served to encourage and enable many people of faith through the years.

As you commemorate Saint George’s Day on April 23rd, this prayer for the day may prove to be a helpful focus for your reflection.

the banner of the cross,

grant that we may be strongin every battle against sin,and attain the crown of eternal life;

through Jesus Christ our Lord, who lives and reigns with you and the Holy Spirit,

one God, now and for ever.”

Rev. Canon Christopher B. J. Pratt has retired from full time parish ministry,but continues to offer priestly ministry in the Diocese of Huron.