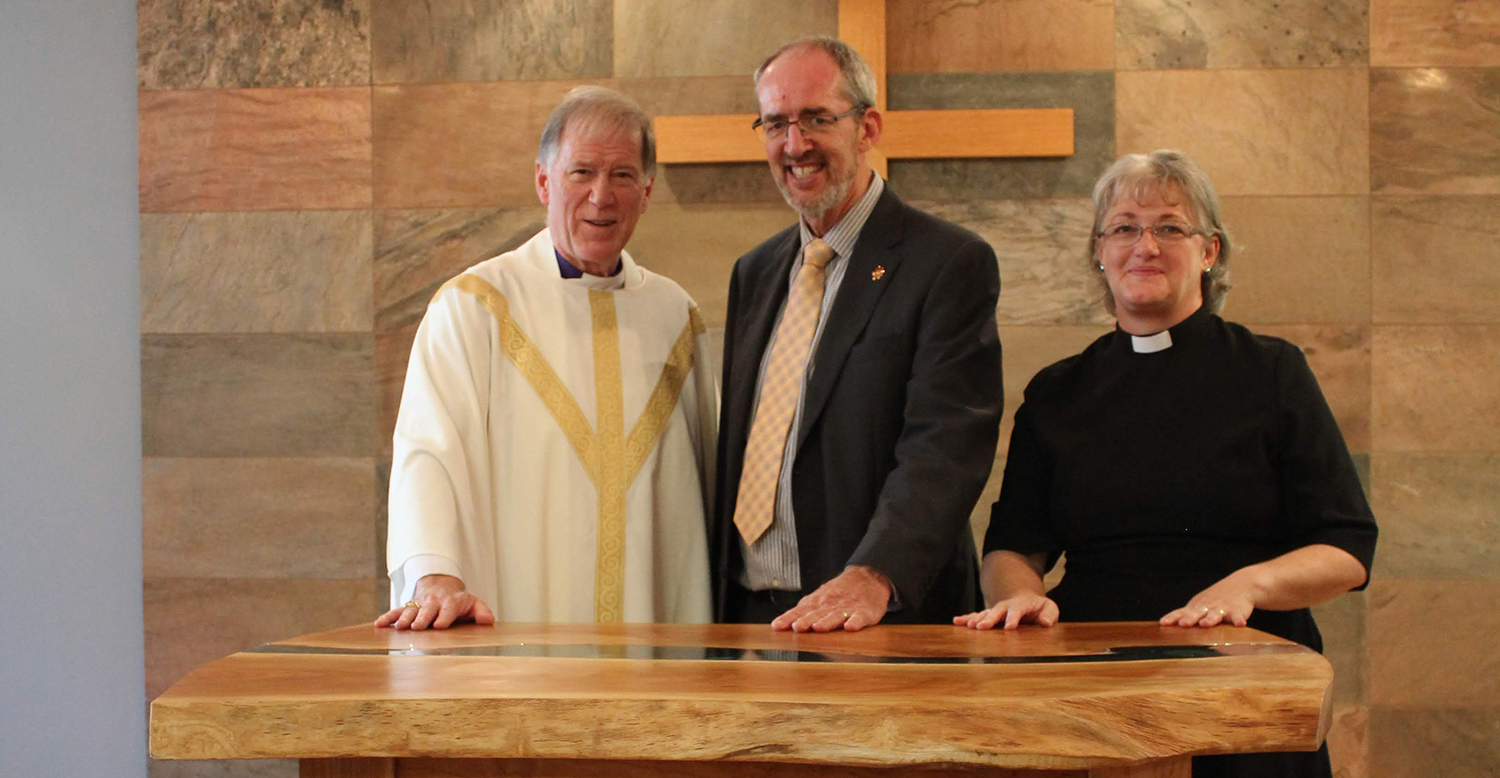 Chuck Erion with Archbishop Fred Hiltz and Rev. Eileen Scully standing behind the new altar at Church House in Toronto. The dedication service was held in September 2018

Chuck Erion, a member of Holy Saviour Anglican Church in Waterloo and former co-owner of Words Worth Books, built an altar for the National Church House in Toronto. He sees his love for woodworking as a part of his ministry.

For Chuck Erion building an altar for the National Church House in Toronto was an ultimate test of his woodworking skills. But for this retired bookstore owner from Waterloo it was more of a spiritual exercise.

“When I was growing up, my United Church family spent several summers at family camps at Five Oaks, the retreat centre near Paris, ON”, Erion recalls his childhood and focuses on one specific memory – the centre’s bell which was rung every three hours (“like and Angelus”, says Chuck) and the short meditation over the PA system always ending with the closing verse of Psalm 90: “And let the beauty of the Lord our God be upon us: and establish thou the work of our hands upon us; yea, the work of our hands establish thou it.”

“I thought of this verse several times while building the altar last spring”, explains Chuck.

In December 2017, Chuck Erion was approached by Rev. Eileen Scully, Anglican Church of Canada Director of Faith, Worship and Ministry, to build an altar table for the chapel of the National Church House in Toronto. Eileen has been an honorary assistant at Chuck’s church, Holy Saviour in Waterloo and was aware of his woodworking skills.

“They wanted a communion table as opposed to an altar. They already have a large altar, but since it’s a fairly small group that gathers there regularly, they wanted something more convenient and I was keen to try it out”, says Chuck who has done book shelves and coffee tables but nothing of this size.

“It was a steep learning curve. I made some mistakes but chiseled my way out of it”, admits Erion.

Chuck has been an amateur woodworker since his twenties. He has learned his basic skills in his family, from his grandfather.

“It skipped a generation, my dad was a United Church minister. He would call himself a ‘wood butcher’”, says Chuck with a smile. But what he had learned from his grandfather came in handy when he decided to open a bookstore, first in Mount Forest and then, later, “Words Worth Books” in Waterloo.

From the very beginning he started making shelves for the bookstore. He made a natural connection combining his two loves – the love for books and the love for woodworking. And when the Erions sold the store in Waterloo seven years ago and retired, Chuck decided to spend more time doing woodworking. It has grown into his main hobby.

Chuck goes into technical aspect of his work for the National Church with a great delight and – in great detail.

“We agreed that the top should be live-edge cherry planks with an epoxy “river” poured between them”, Chuck sums up his first meeting with the Primate and others on staff at Church House.

So in February 2018 he sourced the wood and epoxy at Legacy Lumber near Rockwood. Eileen helped with the layout of the two planks and suggested cutting curved ends on both.

The setup for the epoxy pour proved to be a major challenge.

“I have never done something with epoxy. I could find loads of river table videos online but little instructions. Turns out you must really seal the edges!” says Chuck while remembering a few truly horrifying moments:

“I first caulked the edges of the planks and attached a five-foot wide sheet of plywood to the bottom. I should’ve taped across the gap first. I mixed and poured the epoxy on a Friday in March and left it to cure for the weekend. When I returned the level of epoxy was down by a third because it had leaked, gluing the plywood to it, and running down my table saw to the floor! It was a painful challenge to separate the plywood from the cherry.”

Even when he talks about these technical details, Chuck puts them in a wider context. Like when he explains the way in which the legs are joined to the apron and struts:

“They are joined with mortise and tenon joints, a wood connection dating back 7000 years. In a stained glass window at our church, Jesus in his carpenter period is shown carving one!”

When the altar was displayed at his home church in Waterloo on September 16, 2018, just a few days before its dedication, this stained glass window was the place where Chuck gathered the children’s focus group and explained them why and how the altar was made.

“I love this window, it depicts Jesus as a carpenter. Both Jesus and Joseph are in a workshop but Jesus is the one who is carving”, says Chuck.

Chuck has been involved with the church his entire adult life – from being a church pianist and organist in his teenage years with his dad’s church, to his role as a warden in Anglican churches in Mount Forest and Waterloo, following his decision to become Anglican during his student days at the University of Guelph thanks to the chaplain at the University. His wife is now a warden at Holy Saviour.

His retirement marked the beginning of a serious discernment regarding his ministry in church, first through the Ignatius exercises and later Education for Ministry courses. He found himself engaged in the Movie Night project at Holy Saviour – a gangbuster from the get-go in September 2017 – and also helping with the parish newsletter.

“The Movie Night is very social – on the second Saturday of each month we have some 20-30 people – and also the work on the newsletter since in each issue we are doing a profile of someone in our congregation. The woodworking balances more my solo side. I need time by myself and the most pleasurable is the time spent in the shop”, explains Erion.

This is why the dedication service for the newly built altar was so rewarding for him. It was held in Toronto on Sept. 19 with Archbishop Fred Hiltz presiding. Former archbishop Michael Peers was among the fifty guests.

“The ceremony itself, the blessing was really gorgeous. Eileen wrote it”, remembers Erion and explains how it talked about the cherry tree – the material he used – and about the birds that lived in it. There was a prayer thanking the artist for his dedication and patience and his attention to detail…

“When the Primate blessed the altar, he touched every part of it and then he turned to me and said: ‘Chuck, I want to bless your hands’” – the detail of the service Chuck Erion will never forget.